The musician Nikolay Lvovich Lugansky is a pianist born 1972 in Moscow. The production of his new website was commissioned by his Moscow based talent agency. We previously produced, as a web design company, the new three language website of Georgy Tchaidze, a pianist from Berlin, who is represented by the same agency.

The inquiry came to us in September 2018 with the stated goal of creating an individual website that documents the musicians career and music interpretations. Further important aspects had been the languages English and Russian, as well as in a future stage of expansion French and German. Besides the extensive discography areas such as publications, press and international concerts (live dates) had a high priority.

After a long concept phase, the definition of the Russian areas and their headlines (e.g. the romanization of the artists name according to his target audience and their respected countries/places) and the agreement process, the first sketches where designed and fleshed out in February 2019. These have been produced in collaboration with Magnus, a Berlin based designer, who has been working for 20 years in our team. His knowledge and experience with classical music projects where along with his artistic skills the decisive factor for his inclusion in the project. 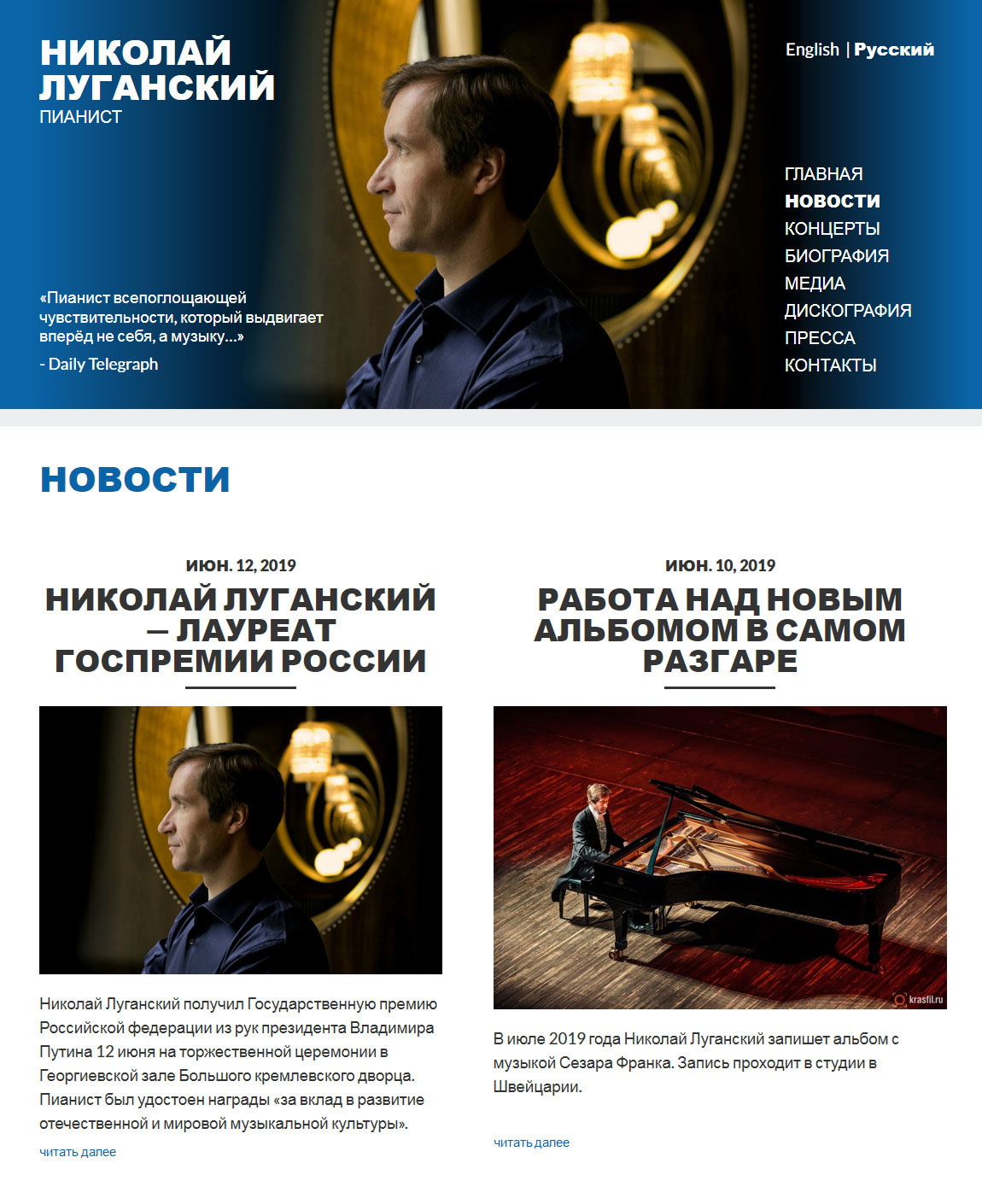 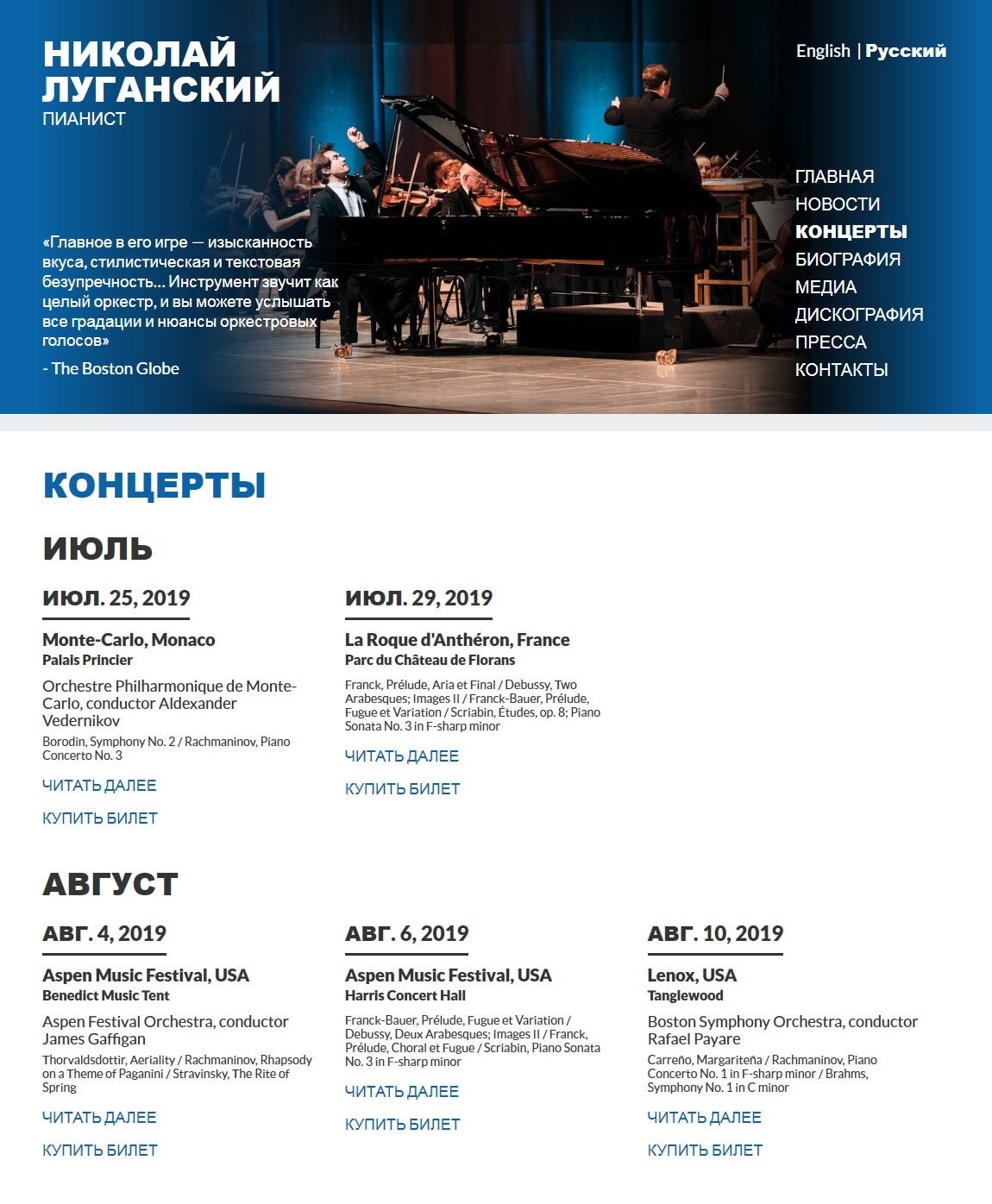 After several approval steps, we brought Valia, a designer from the Moscow based CAB agency, who among other things is responsible for Nikolay Luganskys current cover artworks, into the team to check the layout, typography and text raster. Together the font and typographic traits where aligned once more with the print layouts. End of march the production was prepared and the remaining image material was ordered from various photographers.

Determination of an international provider for the pianist website

At that time we checked on Russian providers in order to rent a high speed server for the project. Eventually we decided on REG.com because they offered the best technology and load performance and are internationally very well connected. The goal was to have the website available from Japan, North America and all over Europe without CDN with very minimal load times.

Conceptually we acted under the assumption that REG.com as a big east European player in the provider business would have, along with the Russian, a full English interface available. But at times it was not easy to make the adjustments, since some of the settings and information was only available in Russian. Reason for this being, among others, that the provider has to adhere to country specific register guidelines and privacy guides, which we first had to become acquainted with. But the basic functions and technologies are based on English language software products.

In mid May 2019 we had finished producing to first English language version and had passed all the acceptance procedures. Now Pavel joined our team, as a content manager to produce the Russian version together. The localization progressed thanks to him quickly, since he was also technically knowledgeable and was well versed in Wordpress as well as its back-end. The communication was excellent.

The website based on Wordpress 5.x with our custom theme (Montreal 1.0) is installed on a Linux system (+1024M RAM) at the Moscow provider REG.com. Overall only four plug-ins (e.g. ACF and WPML for languages) have been deployed for the main website functions. For performance, backups, logging and safeguard (hardening) five further plug-ins have been installed. Among these we use an integrated solution that prevents brute force attacks from the outside. The website was ranked A (91 points) with a load time of less than 881 ms by Pingdom and runs very fast internationally.

Finally a clean documentation, within the frame of project, was created as well as videos about the usage and maintenance of news articles was delivered to the talent agency.

In the beginning of July, after nine month of production, the new website for Nikolay Lugansky was completed. With much international communications, research and an interesting technological setup this pianist’s website was one of the more complex projects in the last couple of years. The feedback regarding the production is, so far, consistently positive and we are very proud of the finished website.

Do you have questions about this production or need advance information about the production of your own new website?

Article by Michael Kuphal, Webdesign Berlin
Michael Kuphal and his team develop customized websites and consult in the areas of server solutions, security, barrier-free web design, ranking optimization and DSGVO modifications. In the network further specialists are available among other things for editorial photography, print productions, VR, 3D, APP-, Game development and Socialmedia companies, which can be used project-oriented.